I usually write an entire review about a single show, but this time I decided to share some series that I stopped watching along the line for various reasons.

I would like to start this list with Lucifer, it’s a series about the devil himself, but oh well he got bored of hell and opened a nightclub ironically in L.A. Through some circumstances he ends up being a helping hand for the police in various cases, through his devilish charms and convincing nature he shows that he’s helpful when it comes to solving different cases. Lucifer is a very misunderstood figure in the series, and that fills him up with rage, and that’s what a liked about the 1st season. In the 2nd season, it ends up being more of a romance drama with supernatural aspects, that didn’t appeal to me personally as the vengeful Morningstar did, even though he is still a highly likable character.

END_OF_DOCUMENT_TOKEN_TO_BE_REPLACED

This is one of the titles that I have seen countless times in memes, anime portals, Youtube videos, and anime community overall, it’s the second most popular manga in Japan, I read about that even a designer brand like Gucci collaborated with it! And that put a seed of curiosity in myself, so I watched the first anime season of JoJo’s Bizarre Adventure and after doing some further research on this, I think I learned why it became so big and influential.

END_OF_DOCUMENT_TOKEN_TO_BE_REPLACED

Taboo has been for quite a time on my radar, but after finally watching the series, it entirely surpassed my expectations. There is a whole set of reasons why it did, and in this review, I will state those.

The story begins with the return of the presumed dead James Keziah Delaney (Tom Hardy), who merely arrives for the funeral of his late father, and with his appearance shocks whole London. His unexpected arrival also turns him into the legitimate successor of his father’s shipping empire and having that in mind he plans to rebuild it into full glory. Too bad this won’t be that easy, and this inheritance turns out to be more of a curse considering all the powerful enemies that it attracts, the powerful East India Corporate, and the crown itself, in an arduous period where the war between Britain and the States is near the end.

END_OF_DOCUMENT_TOKEN_TO_BE_REPLACED

Hello everyone, I’m currently watching a couple TV series that I’m planning to review but until I get done with them, I will share some manga that I’m enjoying right now and I think they deserve an anime adaption in the near future.

Beastar, I just got done with reading around 13 chapters and I’m hooked by what I’ve read so far! And yes I acknowledge that 13 aren’t enough to judge a manga but it still offers something different from what I have read so far.

It’s a world inhabited by humanoid animals, the story is in a high school which serves to present us a society model of this world and the students are divided into two groups: carnivores and herbivores, with our main character being the big bad wolf itself Legosi! Which is rather a calm and shy fella but has his charms.

The manga is much deeper as it seems at first glance, It shows prejudice, discriminations between the two “races”, fighting against owns desires and urges, trying to dismiss stereotypes and other social issues.

And all this is shown to us in a high school setting with a bunch of unique characters who view this world from different perspectives. To me, it totally fulfills the premise of being a psychological slice of drama with a lot of creativity.

END_OF_DOCUMENT_TOKEN_TO_BE_REPLACED 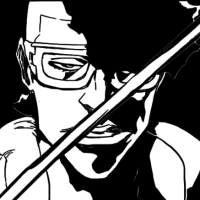 Center of all things Otaku.

All About Anime and Manga
The Visualist's Veranda

Welcome to the DaBoogie blog!
Create a free website or blog at WordPress.com.